The debate around healthcare has been going on for decades. It forces us to choose between two ideologies: obligation to help each other and desire to accumulate wealth. However, the question has already been decided through the Hippocratic oath taken by our medical staff, decisions made in board rooms, and even legislation put in place by some state governments. One such example is the 1986 Emergency Treatment and Labor Act, which requires hospitals to treat emergency room patients regardless of their ability to pay.

The debate about healthcare is not whether Americans should have access to the care they need, but rather how we pay for it. In order to improve our state and the health of our citizens, we much establish a payment structure that is economical while still providing the best care possible. The market approach has not worked. Instead, it has seen annual cost increases that surpasses that of any other industry.

The Affordable Care Act, which moves us toward universal healthcare and the adoption of a single-payer system, is flawed. However, it is a step in the right direction. Last year, nearly one quarter of Americans reported that they or someone in their household was unable to pay their medical bills. Through the adoption of the right policy, we can bring under control the rising cost of healthcare and implement a system that encompasses the founding values of America – that all people are created equal and that all citizens deserve access to basic needs in life.

ON MAY 6TH 2020 in the middle of the peak of Covid pandemic Robert Aderholt was doing an interview for the Guntersville Gleam bragging about being at his "2nd" home (it's actually his 3rd, but who is counting?).... while I was on another mask distribution in DeKalb County. 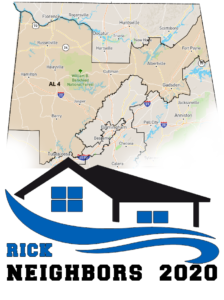